And now for a new research project, the Kuttrolf, or gargling bottle.

A while ago Christian mentioned wanting a glass, but he didn't think he'd be able to describe it for me very well. It was something he'd seen for sale at Pensic, but they one they had was too small so he didn't buy it. At Ursulmas he finally gave describing the glass a try, and I immediately knew what he was talking about - one of those funky vessels with the bulb at the bottom, the twisted neck, and a funnel-like opening at the top. I drew him a picture, and it was right on. Then came the hard part - remembering were I'd seen the picture. Finally I tracked it down, I had several images in books and had probably seen one while I was in Cologne.

Once I knew the name, they were easy to find. These vessels are known as kuttrolf, garglers or gargling bottles. This is because of the glugging noise made when they are poured due to the multi-channeled neck. They may have been used as drinking vessels, bottles, or both. During the German Renaissance there was a fad for hard to use and strange looking drinking vessels, so drinking from such an unusual glass wouldn't have seemed as odd as it does to us now. Tastes do change, and eventually this style appears to have morphed into the more modern kuttrolf style decanter. The kuttrolf Christian saw at Pensic was probably similar or identical to the simple ones offered by Jelldragon and Forest Glass:

Here is the image of the earliest of this style Kuttrolf I've found to date: 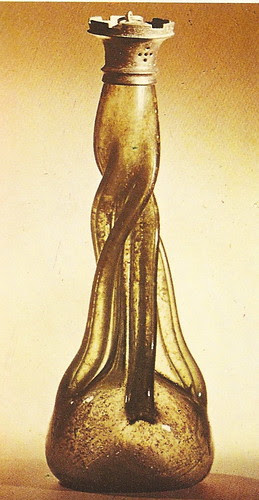 This is a 15th century German or Dutch Kuttrolf. From, "Antique Colored Glass," by Keith Middlemas, pg 15.

And one that isn't twisted: 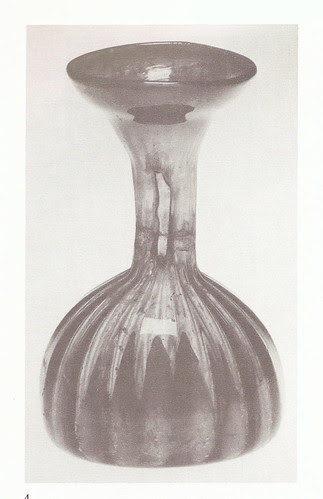 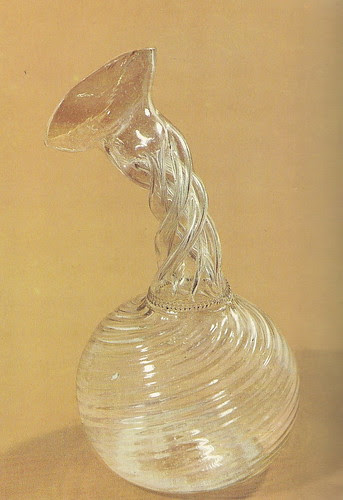 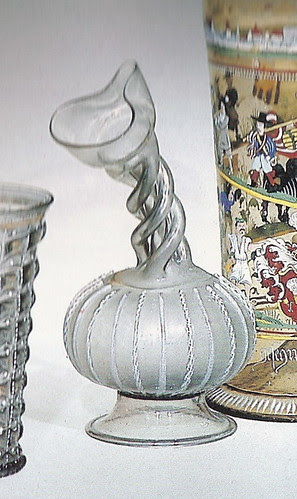 One from the Rijksmuseum in Amsterdamn

And a later version: 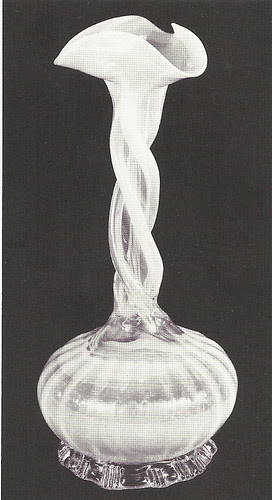 After this the Kuttrolf seems to morph into a larger decanter and continue to be made on and off until the present:

Posted by ElfieDoom at 1:13 PM No comments:

Somehow I got on a new glass kick. I started out making palm cups (aka globular beakers) for Inga last summer. After having made a bunch, I finally got around to doing some of my own research, and wow does that vessel form (and I use the distinction loosly) come in all sorts of varieties. At Twelfth Night Driffa (sp?) and I talked a little more about trade stuff, and apparently her guy doesn't favor raised decoration, so I've been doing some research into other appropriate decorative techniques for that style vessel. While trails and interestingly manipulated raised bits are the most common form of decoration on globular beakers, there are also some examples with raking. Raking is neat, and I've been meaning to practice it for years but have never really gotten around to it Oh look, an excuse to practice! So for the last couple glass blowing sessions I've been producing some fun raked and feathered vessels, trying to figure out exactly how they did what. There are a couple different raking techniques that appear to be used in various areas. There is a very agressive technique where a lot of glass is moved, and there is a more precise technique which appears to move less glass. Oh, and for clarification, raking is usually a pattern where the glass is patterned in just one direction leaving a wave-like look with rounded top or bottom, and feathering usually applies to moving the glass in both directions so the pattern is more like a series of v's or zigzags. 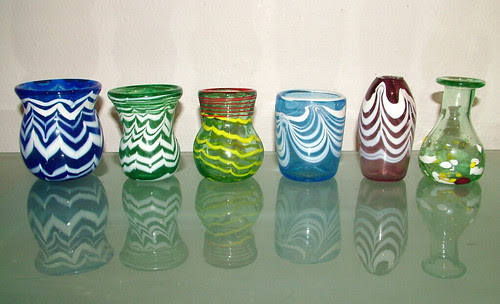 The cup on the left is my second attempt at raking/feathering in three years or so. I an impulse I did things a bit differently. Instead of hauling a whole bunch of glass down the side of the glass and then back up with the tweezers and thus hideously mutilating my bubble of glass, I used a bladed wax working tool to slice in one direction repeatedly, and then back in the other direction. Because my bubble was larger when I did this, it worked pretty well and retained the pattern nicely. It is a pretty swell cup. Things I decided to work on included making smaller threads around the bubble to feather, and working on the pacing of the pattern.

The second cup from the left was my first cup on my second day of glass blowing trail and error for this project. I was trying to get finer trails and more evenly spaced pattern. I did all right, but it still needs work. I also did some green trails and a lip wrap at the top. Here is the example of really nice even feathering on one of the extant vessels: 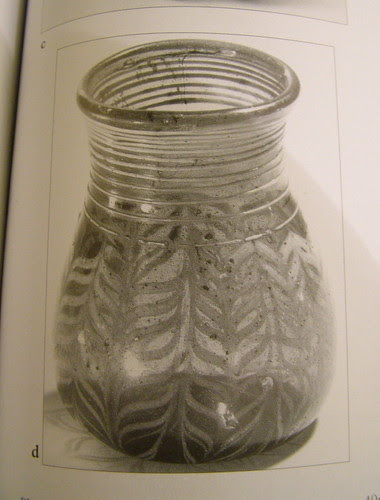 This was by far the nicest exampe of feathering I saw, and it was also on a very small beaker ( about 3 inches). There was also a vessel with very crude feathering of the "haul a lot of glass around" type where all of the feathering had migrated to the top of the vessel when it was blown out. My guess is that the raking was done when the vessel was smaller and then blown out quite a bit.

The third beaker from the left was a fun experiment that changed track half way through. Aside from all decoration experimentation, the overall shape looks verra nice, so I am happy with it. As far as the decoration goes, I started out trying to mimic the technique used in the image below, and switched to doing something else once I realized that would work and had a new idea half way through. 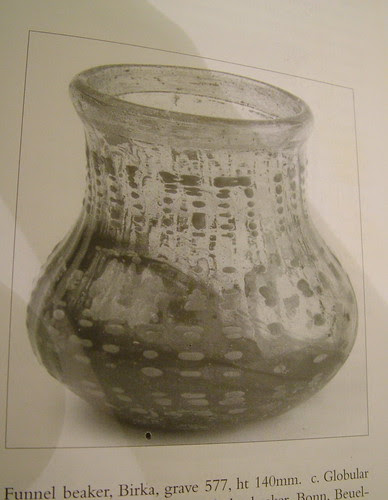 My hypothesis was that the dashed were formed by first blowing the glass into a ribbed mold, then wrapping it with fine trails of glass before blowing it out. When it was blown out, the trails that weren't in direct contact with the glass would sperate, leaving dashes. I'm not sure if they meant to make the dashes, or if it was a decoration achieved accidentally, but was interested in how they arrived at it. There are certainly also examples of beakers blown into molds with applied threads that don't seperate, either because of a less aggressive mold, thicker threads, or perhaps having the threads pressed down into the glass before the bubble is blown out. 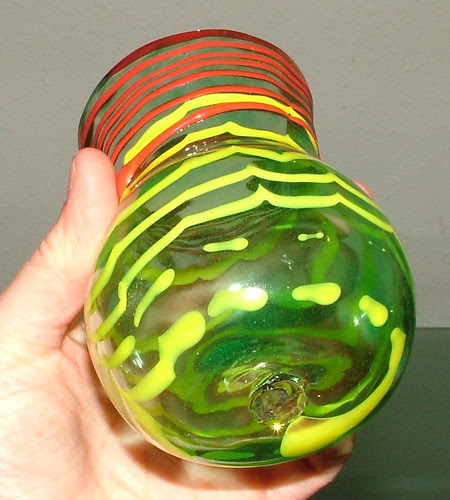 As you can see, I started achieving the dashes when blowing out my bubble almost right away on the bottom. Trying to blown out the wrapped mold-blown bubble was interesting, and somewhat difficult. The un-wrapped top of the bubble wanted to blow out first, rather than the restricted part below. The ribbing creates an intrinsically stronger form, and being wrapped with the stiffer yellow glass acted almost like a girdle, holding in the bottom section of the bubble while I was blowing. However, trying to get it hot enough to blow out and watching the strength of that section gave me an idea. What about using the ribs from the mold for guide-lines for feathering the glass? If I used them as guide lines I might be able to make more evenly spaced lines. Since I already knew the dashes were working, I switched gears and decided to try some raking in the bold blown grooves. I only managed a little, because the top of the bubble had already blown out enough to make the whole thing sort of floppy and a pain to deal with. While the actual raked pattern isn't great, I do think using the mold as a guide helped with spacing and is something I should explore further.

After doing my trails with finer raking and feathering, I decided to go back and try some of the chunkier raking. My inspiration was this very nice yet simple 8th - 9th century glass from Syria or Egypt: 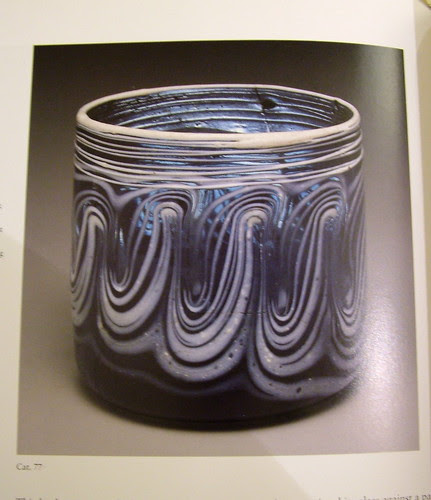 This glass is one of the best examples of this type of raking that I've seen and I totally want a set of these. Might be my next project! There was quit a bit of glass that was blue with white trails and red-purple with white trails, produced at one or more glass workshops in Egypt or Syria. I'm bummed that I didn't get to finish the purple raked cup I was working on - the raking was looking really nice on it. But bot hthe propane tanks for our glory hole froze up and the burner started burning back, so I just had to box the piece without finishing it. Gee I wish we had a huge propane tank. Or natural gas. Sigh. Oh well, I figure that I will just put it in the kiln and bring it up to temperature when I finally get around to doing some enameling experiments. Then I should be able to pick it up on a pontile and finish the lip. In the mean time, the pattern and color look pretty good!

Back to the globular beakers, the color choices are kind of fun, aren't they? At first I assumed all the colors were blues and greens with white trails because of having seen the blue and white syrian/egyptian stuff in color photographs. But I realized I was making a rash assumption, so went back and did some more reading. Base color included light green, dark green, green/blue & blue/green, a red marbled color, brown, light blue, black, and maybe more. Trail colors included all the base colors and a range of contrasting colors such as white, yellow, red, and reticella of various colors. Glass was most likely a soda lime glass, and the wall thickness ranged widely from paper thin to 5mm. Lips were sometimes folded back to thicken them, but not always. Lips on the globular beakers mention in Price's book were always fire-polished.

Oh, and the cute little bottle on the end was my warm-up piece. I used the glass shards left over from trying to break up bards of glass with a hammer (yes, I need a better tool!) as decoration on the sides of the bottle.

And here is a little taste of some of my other glass projects lurking on the horizon inspired by various images: 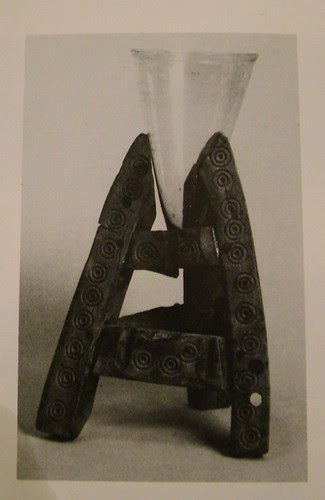 A lamp/conical beaker holder based on one excavated at Jalame (pic from excavations at jalame site of a glass factory in late roman palestine). I want to get a couple of these done before Estrella. Don't know if that's happening though. 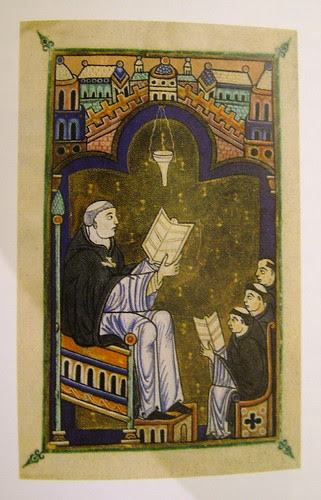 Individual hanging lamps. Here is one of several depictions. This one is from a 12th century manuscript in the Bodleian Library. If you have pics of hanging lamps, please direct me to your sources or send me copies, pretty please with cherries and whipped cream on top! I've been collecting info on lamps for a while starting back with polycandelons, and I need to write stuff up as well as make more of them...

A 16th century German claw beaker. The majority of the claw beakers I've seen are anglo-saxon period (6 - 10th centuries AD) with a few as early as 4th century, and those are finer Roman ones that often represent specific sea-life. In the Renaissance they went back to looking at the Roman stuff and re-invented the claw beaker yet again. Still funky, in yet another way. I want to do a stylistic comparision between the various periods along with comparisons to other contemporary forms. 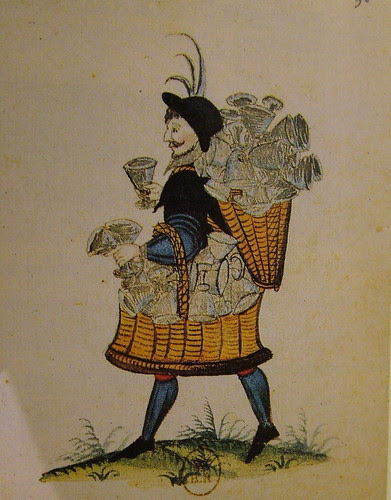 And look! My merchanting inspiration! A mid-16th century depiction from the collection of the National Library in Paris.
Posted by ElfieDoom at 11:57 AM No comments: 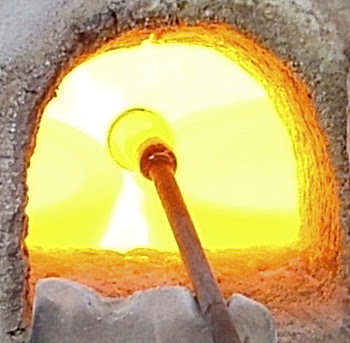